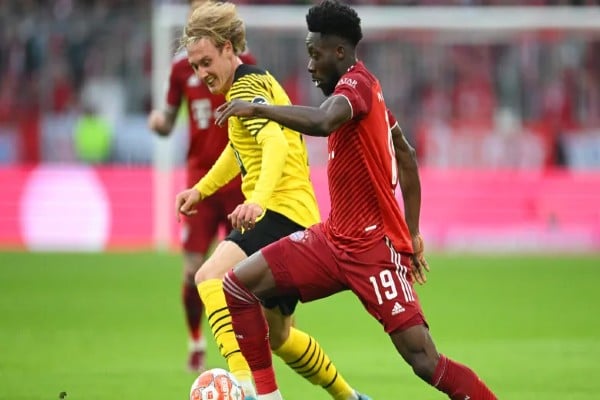 Following a case of COVID-19, which triggered myocarditis in him at the age of 21, he was out for nearly three months. He returned in early April and has registered five assists in 28 appearances across all competitions. On Saturday Alphonso Davies started as the left full back. Bayern Munich has won its past eight league games in a row against Dortmund. Borussia’s last win over the Bavarians dates back to 2014. Bayern Munich’s 10th straight German championship is a new European top-five league record, eclipsing Juventus’ nine Serie A championships in a row from 2012 to 20. Bayern’s players sprayed each other with beer after the game. Benjamin Pavard was the first to unleash a torrent of beer on Julian Nagelsmann following his first championship victory as coach.

Marco Rose’s players wanted to delay Bayern Munich’s title celebrations for another match day. However they had no chance of doing so. However, the guests were disappointed by individual errors and missed opportunities. Referee Daniel Siebert responded to fraying tempers near the end of the first half, booking Rose and Emre Can.

Bayern took the lead in the 15th minute when Leon Goretzka cushioned the ball back for Gnabry. The unmarked Germany forward tried a shot on the left side of the goal. He controlled the ball with his thigh before releasing it into the back of the net. Erling Haaland missed a good shot for Dortmund before Gnabry’s second goal was ruled out by VAR for offside in the 30th minute. The home supporters didn’t have to wait long to restart their celebrations as Gnabry forced Dortmund’s Dan-Axel Zagadou into a poor pass in the 34th minute.

Check out our list to find out about the best sportsbook in Canada. Online sports betting sites regularly offer promotions for different sports and leagues.

And Thomas Muller passed to Robert Lewandowski, who scored his 33rd goal of the season. Emre Can a penalty to revitalize Dortmund’s hopes early in the second half, when the visitors played with considerably more energy. However, Pavard got away with no punishment despite bringing down Jude Bellingham while attempting to reach the ball. The refree didn’t decide to give a penalty. In the 83rd minute, Musiala sealed a 3-1 victory for Bayern right before Haaland missed to shorten the gap.