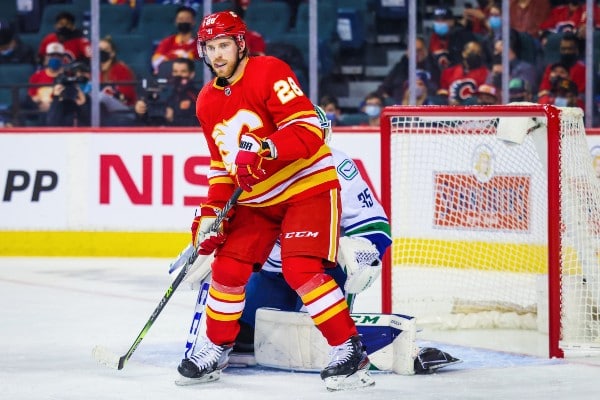 The Calgary Flames will play the Edmonton Oilers at Scotiabank Saddledome in Game 5 of their play-off series on Thursday. The line on this game is +115 for the Oilers, while Calgary is -140 according to sportsbooks who offer sports bonuses. The over/under is set at 7.

The Flames were on the wrong side of the score with a 5-3 loss in Game 4 against the Oilers. The Oilers had a good offensive showing, as evidenced by the victory. They were able to score on 5 of the 26 shots they took. They had four power play opportunities and scored two goals. This game featured 8 minutes in box for Edmonton.

In terms of their goal scoring ability, the Edmonton Oilers have scored 285 goals (8th in the NHL) this season, while giving up 251. During the regular season they accumulated 104 points. Their points percentage is .634 for the season. During power plays, Edmonton has 61 goals and 235 opportunities, giving them a percentage of 25.96 percent. The Oilers have allowed their opponents to score 199 goals while scoring 224 of their own during even strength play this season. Edmonton have attempted 2,790 shots and have a shooting percentage of 10.2 percent. The Oilers have allowed 2,647 shots to be fired at them thus far and possess a save percentage of .905.

Opponents of the Edmonton Oilers have 252 power play chances (9th in the league) and have scored 52 goals. Mike Smith will need to defend against the opposition’s offense. Smith has allowed 1,720 goals in his professional hockey career, for an average of 2.70 goals per game. During his NHL career, Smith has played in 670 games. For every 38,260 minutes on the ice, he has a save percentage of .912. He has amassed a record of 299-263-78 and started in 627 games. Over the course of his career, Smith has recorded 335 quality starts and a percentage of .534. Smith has 19,589 shot attempts against him and 17,869 saves.

In Game 4, the Flames had three power play chances and scored one goal out of those tries. The Flames fired 32 shots on goal but scored three goals. Calgary has taken 2,908 shots (3rd in the NHL) and a shooting percentage of 10.01%, while allowing their opponents to take 2,374 efforts. As a unit they’ve had a success rate of 83.2 percent on their opponents’ 250 power-play opportunities, and their save percentage is at 91.3 percent. They have a power play percentage of 22.88 percent and have had 236 power play chances. The Calgary Flames have scored 237 goals at even strength and 54 goals on the power play (10th in hockey). The Flames have allowed a total of 206 goals, with 164 being at even strength and 42 while having less men on the ice.