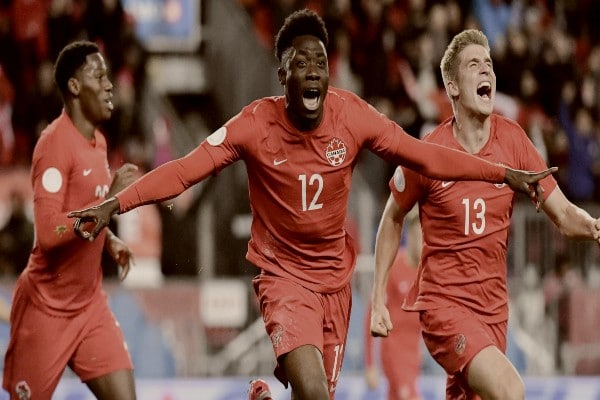 It really occurred. Canada men’s soccer team has qualified for its first FIFA World Cup since 1986. That’s 37 years of frustration and heartbreak swept away by an exciting and surprising qualifying run. And it has delivered a loud message. Canada’s men’s soccer team has arrived, and it intends to stay for a long time. The team’s supporters were able to rejoice at BMO Field in Toronto on March 27, when they won against Jamaica.

It’s a metamorphosis that appears to have taken place in a matter of days. For decades, the Canadians have been one or two players short, as if they were missing some vital ingredient. Les Rouges never had enough fight or grit, and they would always trip up along the World Cup qualifying route. However they always appear to be in a barren international football desert without any genuine future prospects. It’s no secret to the diehard fans.

But, combined with the rise of a few generational talents, the emergence of a manager who has brought in new players and given them a strategy, and a natural development of the game in Canada, this exceptional happening is becoming all the rage on the Canadian sportsbooks scene. It’s also only a few months after the Canadian women’s soccer team captivated the hearts of its country with an Olympic gold-medal performance.

Where did it come from? How did this happen? If you’ve just recently started following the Men’s National Team in Canada, here’s why they’re making history. Many online sportsbooks have adjusted their odds for Canada.

Canada doesn’t just have the greatest attacker in the area. He’s one of the best in the world, and he’s showing it again this season with LOSC Lille in France and in Europe’s top club competition, UEFA Champions League. This summer’s huge transfer fee will be more evidence. Alternatively, you may choose to settle for the goal he scored during qualifying against Honduras, which had all of the markings of a top striker. His ability to control a long ball and make it follow his every command all the way to the back of the net was unusual. He followed that up with a goal against El Salvador. He’s the type of game-changing player any winning squad requires. And he’s only 22 years old.

During the last few matches, Jonathan David has stolen the limelight from Bayern Munich’s Alphonso Davies, who many consider to be the world’s greatest left back. After recovering from COVID-19, Davies has been diagnosed with mild myocarditis. But when he’s on the field, he demonstrates how exceptional he is on both sides of the ball. It’s also why Canada soccer frequently uses Davies as an attacking player, allowing him to cause havoc. But he’s a constant left back for Bayern Munich, making game-saving, highlight-reel recoveries. And he regularly goes viral on social media with his defensive effort. However his real hidden talent may be what he’s about off the field – the contagious enthusiasm that Herdman claims the team has lacked.

The Canadian coach mentioned how opponents have lately come up with methods to neutralize Alphonso Davies. Others have packed in defenders, clogging up the lanes to limit Jonathan David’s effectiveness. However, when you have a third component in a three-pronged attack that is just as dangerous, it feels almost unjust. Even the Canadian coaches have praised Tajon Buchanan’s Davies-like qualities. He’s unpredictable, able to improvise, and he becomes difficult to stop when he gets a head of steam.

He began his career with the New England Revolution in MLS, then moved to Europe and currently plays for Club Brugge. But it was his international breakthrough moment with Canada at the 2021 Gold Cup. During that tournament he carried the team on his back in David’s and Davies’ absences. There have been several situations throughout qualifying when Buchanan has made the difference, bringing a competitive edge and attitude to the team with his performances.

Without a leader who unifies all the elements, a group will never achieve great things, and that’s what John Herdman is doing. After helping the Canadian women achieve global dominance, he’s now doing it for the men. And that’s not a typical coaching career path on the global scale. But it’s not difficult to spot the characteristics Herdman will bring to both teams: He’s a modest coach with a clear message and strong motivation. He understands the wider picture and has a strategy for it, and he’s able to build group agreement on implementing it. It also helps that many of the tactics he’s employed, from recruitment to strategy and squad management, have been successful.