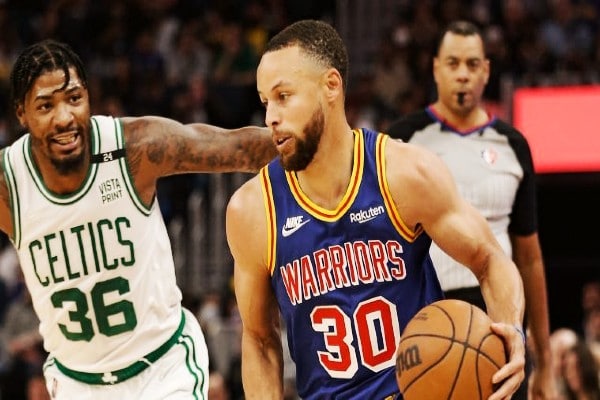 The matchup is now known. The 2022 NBA Finals will feature two of the league’s top teams. The Celtics, who have 17 championships to their name, will try to add banner No. 18 to the TD Garden rafters. The Warriors will attempt to win their seventh championship. This will be a star-studded event, with the Celtics’ vaunted defense going up against an equally potent Golden State offense. Which squad will raise the Larry O’Brien Championship Trophy? If you’re interested in sports betting keep reading in article to learn more about the odds. Betway Canada is one of the sports betting sites which offers the best odds on NBA finals series between Celtics and Warriors.

The Most Important Matchup in the NBA Finals

How will Stephen Curry do against the 2021-22 Defensive Player of the Year? When these teams met in March, two of the NBA’s most exciting players went at it. Marcus Smart slammed into Curry on what Steve Kerr described as a “dangerous play.” Curry had missed three of four field goal attempts and committed four turnovers before suffering that injury. Stephen Curry has exploded before against the Celtics, but he hasn’t yet this season. Last year, he dropped 47 and 38 points in two close defeats.

This year’s Celtics defense is very different. In the second half of the season and throughout the NBA Playoffs, they’ve been one of the best defenses in recent memory. Curry will have to deal with more switches and superior overall personnel than he has previously. In this year’s NBA finals Celtic will also have a more dynamic rim protection. Smart will almost certainly be the primary player on Curry. However, in their starting lineup, the Celtics don’t have any weak defenders to target. Curry is going to have to work hard for everything he gets.

The Most Crucial Stat

The Warriors were able to exploit the Mavericks’ lack of rim protection, averaging almost 50 points in the paint throughout the Western Conference Finals. The Heat, Celtics, and Mavericks, on the other hand, had a combined average of 32 to 40 points in the Conference Finals. The Golden State Warriors are famous for their 3 point shooting, but rim pressure might provide open shots for their shooters. And when the Warriors got past their first line of defense, the Mavericks were unable to show large bodies.

They also made too many errors in communication, covering the Warriors’ split cuts and movement heavy scheme. Will the Celtics, a switch-heavy team that is prone to lapses in court coverage, make fewer mistakes as a result of this player motion? They have superior defensive ability, but it will be the mental mistakes that they must avoid.

Jordan Poole has been otherworldly from offensive point of view. However he’s also been extremely ineffective defensively. Can he be hidden by the Warriors? In their series with Dallas, they attempted to have him on ball screens, but he couldn’t execute that coverage properly. Will they stick to their strategy? Will they come up with something new to keep him from being mercilessly switched onto Jayson Tatum and destroyed?

How well can Robert Williams’ knee hold up? When he’s been on the court, the Celtics have played like a different squad. His ability to defend in the paint and rebound is significant. Rebounding is critical, given how effectively the Warriors — and particularly Andrew Wiggins – have plowed through opponents’ offensive boards. To address all of the team’s defensive concerns, he has covered a huge area. On top of that, he’s sprinted out to 3-point shooters in the corners for huge blocks on the perimeter. If his workload isn’t restricted by fouls, he’ll bring the Celtics’ defense to the next level.

This is going to be an outstanding NBA Finals. And if the Warriors can divert the Celtics’ vaunted defense with their chaos of movement, they will win. If the Celtics can discover a method to score enough points, they will triumph. Only the Mavericks attempted more 3-pointers within the above-the-break three points during the NBA Playoffs, and their success was contingent on how hot they were in a particular game. It’s all about the big shot when you have two equally matched teams. During the regular season, the Warriors were the league’s best team at making those shots, while the Celtics ranked twentieth. The Warriors have an edge in terms of accuracy there.

We’re not sure if anyone will be able to break through this Celtics defense, but we do believe that they’ll drop a few points to hot shooting. This is the team best prepared to handle the punishing Warriors offense. The Celtics suffered an early-season loss to the Golden State Warriors, but they were a completely different team in the second half of the season. However Boston beat the Warriors in the second meeting with Curry missing most of that game.