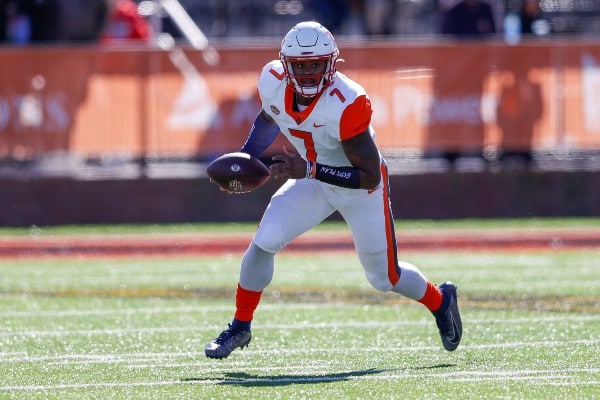 The NFL season has been behind us for a long time. There’s been a lot of buzz regarding free agency as teams look to improve their roster and have a better shot next year. The NFL Draft, which will start on April 28th, is one of the most important components of this team building. There is no clear-cut no. 1 overall quarterback, which adds intrigue to this NFL draft. While the QB group is not particularly strong, there has been some movement in their favour. Although none of the quarterbacks is supposed to be in the Top 5, Malik Willis has the best chances at +300. There are two frontrunners for the title of the first QB in this race.

The favourite to be the first quarterback is Malik Willis, who is priced at -130. Willis started his college career at Auburn before transferring to Liberty, where he emerged as a potential professional prospect. In two seasons with the team, Willis threw for 5,107 yards and 47 touchdowns. The potential QB pick has some unique physical skills and a near-ideal play style for today’s NFL. The team’s system will have a significant influence on his NFL career, but he has an intriguing skill set to begin with.

In contrast, many consider Kenny Pickett to be the more traditional QB and possess the best arm among the QB prospects. Pickett has a far better statistical background, but this is essentially due to him being a starter for all five years at Pittsburgh.

The young prospect produced 12,000 yards and 81 touchdowns in his career. Pickett has +130 odds to be the first quarterback off the board this year.

Matt Corral (+2500) and Desmond Ridder (+1000) are not entirely out of the question for the first pick, but Pickett and Willis have done a fantastic job separating themselves during the meetings and combine. There will undoubtedly be a lot of smoke ahead of the draft, but we feel confident in selecting Willis as the first quarterback off the board. His outstanding skill set is difficult to pass up, and it appears that the Seahawks will select him with their sixth pick. The odds of -130 aren’t the huge payout prop that most people seek, but considering how big the top QB line gets, this is outstanding value for the top QB prospect. For under 9.5 draft slots at +110, taking Willis looks like a solid bet.

This draft class is more well-rounded on the defensive side of the ball. It becomes especially clear when you look at the offensive line prospects. After setting the Michigan season record for most sacks last year with 13, Aiden Hutchinson is the clear favourite as the first pick. With Kayvon Thibodeaux now regarded as the most likely second overall pick, another pass rusher has risen to the top of the NFL draft.

This will be a draft where there are many offensive line choices. The first-round over/under betting predictions are 7.5 for the position. Evan Neal and Ickey Ekwonu are the two frontrunners for most likely the first big man off the board. Over the last few weeks, everything has changed. Evan Neal was formerly the overwhelming favourite, but that hasn’t been the case recently. The Alabama tackle has dropped in recent weeks, with his current line odds sitting at +115.

The fourth consecutive Alabama offensive lineman in the first round would be Evan Neal. He was regarded as the unquestionable top pick for much of the pre-draft process. He is 6’7″ tall and weighs 360 pounds. The over/under for selection number has dropped from 2.5 to 4.5 in recent days. There were rumours that Neal would move toward the Giants at pick 5. But any interested team may certainly trade ahead of it.

In recent weeks, Ekwonu has increased in popularity. The appeal of the tackle also being able to play interior guard drew several NFL teams’ attention to the prospect. Given Ekwonu’s 6’4″ height and 320-pound weight, this is an appealing feature for NFL clubs. Oddsmakers initially projected Ekwonu’s selection at 5.5 picks. However, we’ve seen this drop to 3.5 with the line for him as the first offensive lineman pick currently set at -141. The stock of Ekwonu, as it appears, maybe more smoke than fire.

Evan Neal is the superior tackle and in fact, NFL clubs place a higher premium on the tackle position. Taking him to be the first tackle off the board at a price comparable to or below that of other top tackles is fantastic value. It is crucial to note that betting on the draft differs from traditional gaming. There is no live game action or flow of the game to follow. Betting lines are typically much more volatile than regular game lines. And a surprise selection might have a variety of domino consequences.