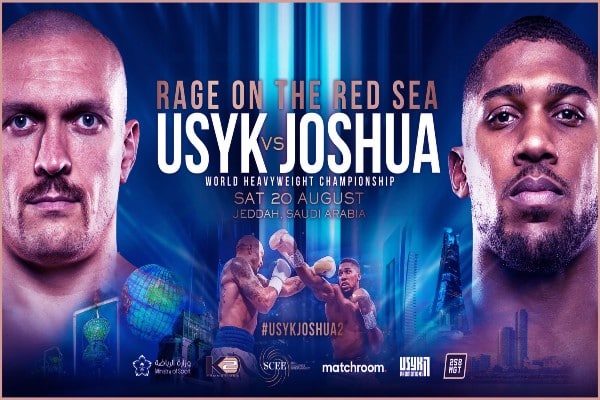 Anthony Joshua is seeking to reclaim his heavyweight title once again and his path is Oleksandr Usyk, who has evolved into a genuine warrior in and out of the ring. The WBA, IBF and WBO heavyweight belts are on the line in a bout scheduled for August 20 in Saudi Arabia. Following a July booking, ESPN’s Mike Coppinger was the first to report the new date, and Joshua’s promoter, Eddie Hearn has now confirmed the encounter in Jeddah.

Oleksander Usyk made his pro debut in 2013. He already won a gold medal at the Olympics a year before. In 2016, the Ukrainian won the WBO cruiserweight crown. He won the WBC cruiserweight crown in 2017-18, defeating Marco Huck and Mairis Briedis. Usyk also defeated Murat Gassiev to win the WBA, IBF, and The Ring cruiserweight titles. In 2018, he became the undisputed champion with a K.O. win over Tony Bellew. Oleksander Usyk moved up to the heavyweight division in 2019.

In September, Oleksandr Usyk dethroned Joshua and won the WBO, IBF, and WBA heavyweight titles. When his nation was invaded by Russia a few months ago, he terminated discussions for a rematch to return to Ukraine. He departed his nation especially to prepare for this bout with Joshua and compete internationally after serving as a volunteer in the Territorial Defense force. Alex Krassyuk, the fighter’s promoter, has never seen him as driven as he is for this bout.

Anthony Joshua made his professional debut in 2013, defeating Emanuele Leo by TKO. Joshua claimed the Commonwealth and British heavyweight titles from Gary Cornish and Dillian Whyte in 2015. From 2016 to 2018, Joshua defeated Charles Martin, Dominic Breazeale, Eric Molina, Wladimir Klitschko, Carlos Takam, Joseph Parker, and Alexander Povetkin. By beating Martin, Klitschko and Parker he managed to unify all Heavyweight belts. In 2019, Andy Ruiz Jr. came out on top in one of boxing’s most shocking upsets ever when he defeated Joshua for all of the gold. Joshua’s first fight in the United States resulted in a seventh-round knockout, as he was knocked down four times en route.

Anthony Joshua defeated Ruiz in a rematch in Saudi Arabia a few months later. Joshua regained the titles against Kubrat Pulev in December 2020 before losing them again to Usyk. “Fighting championship level back to back has its benefits and drawbacks, but I make a decision every day to get stronger, learn from my mistakes, and develop,” Joshua added in a statement. “A happy fighter is an especially dangerous one, and I’m the happiest and most driven I’ve been in my life.” iBet Network provides all information on the 2nd Usyk Joshua bout including the best sportsbooks for boxing events.

When is the Usyk Joshua 2 Fight?

The fight will take place on August 20, in Jeddah/Saudi Arabia. For time being the undercard and main event card are not being announced. We will update this article as soon as the information is available. In addition to that, we also will add betting tips to this news article to inform you.

How to Watch Usyk Joshua And How Much Does the PPV Cost?

There is a long-term deal between Joshua and DAZN, with the worldwide streaming giant expected to acquire global rights for the Usyk rematch. The cost of DAZN’s memberships is given below, although inews.co.uk revealed the bout would be broadcast on a pay-per-view basis. This was tried out for Canelo Alvarez‘s light heavyweight title loss to Dmitry Bivol.

Who is the Winner to Fight Next?

Robert Helenius has requested that the WBA declare him the official challenger for their “super” title and award him with the opportunity at the winner of Oleksandr Usyk vs Anthony Joshua. Joe Joyce is the WBO’s top contender, while Helenius claims he should be in line to challenge for the WBA’s title.

The 38-year-old from Finland has beaten Adam Kownacki in his past two bouts, most notably on the Tyson Fury vs Deontay Wilder III undercard. In his first bout with Kownacki, Helenius won a WBA “gold” belt and is currently ranked second in their ranking. He claims he must be next in line to face the Usyk-Joshua winner for the WBA championship.