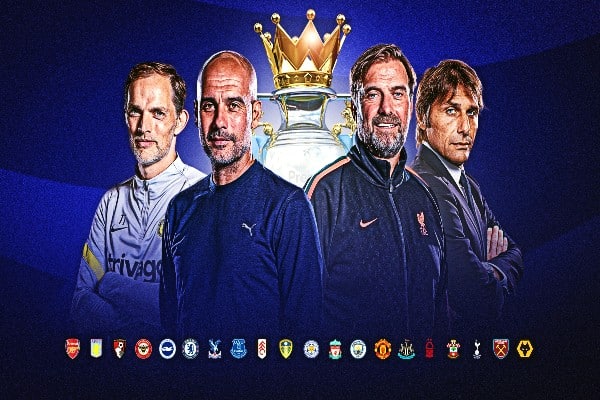 Friday, the 5th of August marks the start of the Premier League 22/23. Like every year several clubs will compete for the championship and some others will fight relegation. Manchester City, Liverpool, Tottenham, Chelsea, Arsenal and finally Manchester United are favourites to win this year’s trophy according the sportsbooks in Canada. And iBet Network provides a preview of matchday 1 while focussing on the so called Big Six. Stay tuned and keep reading to learn more.

The 2022/2023 season opener between Crystal Palace and Arsenal will be held at Selhurst Park, on Friday, 5th of August. The Eagles performed well in their previous two warm-up games. They defeated QPR and Montpellier, but the London Derby will be a much bigger fish to fry. Cheick Doucoure is likely to make his Premier League debut against Arsenal. However James McArthur has been ruled out due to injury. Mikel Arteta’s team, on the other hand, want to continue their winning ways following a thrilling 6-0 victory over Sevilla.

We doubt that Gabriel Jesus’ arrival will be a flop, as he has already proven to be an asset. We predict that the former Man City player will cause havoc for opposing back lines. With no fresh injury concerns to worry about in Gunners team before the local derby, we think there is a lot of bang for your buck with betting on the guests, who stunned in their big win over los Sevillanos.

When the Premier League returns on Saturday, Liverpool will be looking to start it off in style by facing Fulham at Craven Cottage. Liverpool begins the title race without Sadio Mane, who departed for Bayern Munich in the summer. However, the new signing Darwin Nunez is likely to have a significant part in Jurgen Klopp’s squad next season. Since the club owners were able to keep hold of star forward Mohamed Salah, the visitors are the strong favourites to win the opening game.

With an injured ankle, Alex Oxlade-Chamberlain is out of the match. The Portuguese, Diogo Jota is racing against time to be available. Fulham, on the other hand, performed well in the Championship 2021/2022 season. Their striker Aleksandar Mitrovic broke the all-time record by scoring 43 goals. Both Chalobah and Wilson are questionable for the match, while the Serbian forward will be the one to watch for in this game. Anyhow, David fights Goliath in London, so anything less than a routine away victory would be considered a major upset.

The new Premier League season begins with a match at home for Tottenham against Southampton. The Spurs were riding a roller coaster in the pre-season, defeating Rangers and losing to Roma while sharing points with Sevilla. Antonio Conte’s team is seen as a strong favorite to win Saturday’s game, but on the field they will have to show their value. Harry Kane is still with the squad, which means that the opposition backline will have to worry about him. Keep in mind that Richarlison is unavailable due to suspension.

The Saints, on the other hand, beat Tottenham 3-2 in their previous encounter in London, and they’ll want to continue the winning trend. When Spurs and Southampton meet in the Premier League, there is a guarantee for a high-scoring game. Hence we tend to wager on over 2.5 goals. For the away team, both Nathan Tella and Tino Livramento are out.

When the new Premier League campaign begins, Chelsea will face Everton at Goodison Park. And it promises to be an exciting encounter. The Blues are on a mission to restore glory days at Stamford Bridge. Their victories against Udinese in back-to-back games are providing supporters with plenty of optimism for Saturday’s meeting. Raheem Sterling will make his Chelsea debut against Everton, as well as Kalidou Koulibaly, a towering defender, while there are no new selection issues for Thomas Tuchel’s side before the trip to Liverpool.

The 2020/2021 Premier League campaign was a failure for Everton, who barely survived on the final day of the season. Everton players are eager to make up for their unsuccessful season, but they should not be looking for points against Chelsea, who appear to be in much better condition. The hosts have a lot on their plate, but it is made worse by the fact that Salomon Rondon is banned and Andros Townsend is out due to a knee injury.

Manchester United host Brighton at Old Trafford in the first match of the campaign, on Sunday. The Red Devils were far from impressive in the summer, and new manager Erik ten Hag has a difficult task ahead of him during the 2022/2023 Premier League season. Cristiano Ronaldo is always a guy to keep an eye on, while Christian Eriksen is about to make his debut for Manchester United against Brighton. There are no injuries to be concerned about for the home team prior to Sunday’s game.

The Seagulls, on the other hand, are looking to make a statement in Matchday 1. However Yves Bissouma, a key member of the team, has signed with Tottenham this summer and left the club. The Red Devils don’t appear to be in top form ahead of the season opener, and the share of spoils could be the call. Jakub Moder is unavailable for the away team due to injury.

The Hammers, on the other hand, rely on Michail Antonio with Gianluca Scamacca, Nayef Aguerd, and Flynn Downes joining in the summer. Anyhow, we feel that away victory will be a possibility. We believe that Erling Haaland will make life difficult for the West Ham backline. There are no injury concerns for the home team before the season opener. Therefore David Moyes will choose his strongest possible lineup.