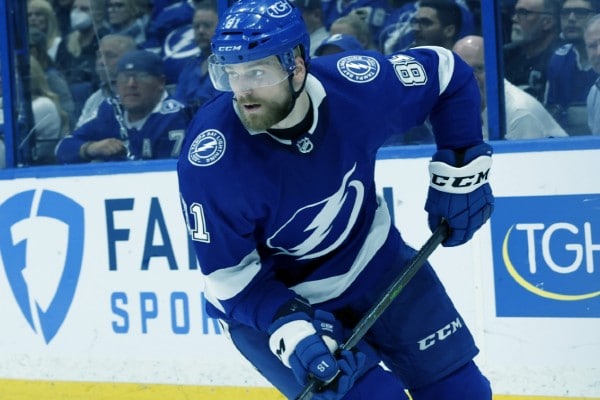 The New York Rangers will play the Tampa Bay Lightning at Madison Square Garden in Game 5 of their series on this Thursday. The series is 2-2 after four games. The Lightning are given -144 odds to win this game, while the Rangers have +120 odds according to sportsbooks in Canada.

The Lightning will enter Game 5 with a confidence boost after defeating the Rangers 4-1 in Game 4. For this game, Tampa Bay had 13 penalty minutes. Furthermore, they had three power-play opportunities but were unable to score. In the triumph, the Lightning demonstrated a strong offensive showing. They scored 4 goals out of the 31 shots they fired for the matchup.

The Tampa Bay Lightning rivals have 252 power play chances (8th in the league) and have scored 49 goals on those efforts. The Lightning have faced 2,441 attempts and a save percentage of .907. Tampa Bay has taken 2,535 shots and a shooting percentage of 11.2 percent. At even strength, the Lightning have allowed 179 goals while scoring 223 of their own. Tampa Bay has collected 259 power play chances and scored 62 goals out of those advantages, earning a 23.94 percent success rate. During the current NHL season they’ve accumulated 110 points for the year, with a point percentage of .671.

In terms of their goal-scoring ability, the Tampa Bay Lightning have 285 goals (7th in the NHL) scored and 228 allowed for the season. Andrei Vasilevskiy is the goaltender for Game 5. In his NHL career, he has allowed 892 goals and had an average of 2.50 goals against per game. During his NHL career, Vasilevskiy has taken part in 365 games. In his 21,390 minutes on the rink, he has a save percentage of .919. Vasilevskiy has a career record of 229-101-24 and has started 355 games. He has 203 quality starts during his career, and his good starts percentage is .572. Vasilevskiy has faced off against 11,039 shot attempts and made 10,147 saves.

In Game 4, the Rangers had 2 power-play chances and scored just once out of them. The Rangers scored one goal out of their 35 shots on goal they attempted in this game. The Blueshirts have scored 195 even strength goals and 55 (tied for 9th in the NHL) with more men on the ice. The New York Rangers have fired 2,392 shots (28th in the league) and gotten a 10.45 shooting percentage, while allowing the opposition 2,528 attempts. The Rangers have scored 250 goals for the season, collecting 110 points, and a percentage of .671. On the power play, they have a total of 218 opportunities and a power play rate of 25.23 percent.

The Blues have killed off a lot of their opponent’s power plays for the season, with an 82.30% success rate on 226 attempts. Their save percentage is at 91.9 percent against opposing power plays. They’ve given up 204 goals in all, with 164 conceded at even strength and 40 on the power play. Igor Shesterkin is the goaltender for the Rangers. 2.31 goals are being scored per game, and he has surrendered 218 in total. Shesterkin has a 70.5 percent quality start percentage in his professional career and has made 67 quality starting assignments. He started in 95 games and logged 5,662 minutes during his career. Igor Shesterkin is an outstanding goaltender, and he has been in goal for 100 games. He has earned a lifetime mark of 62-29-7 and has stopped 2,815 of the 3,033 shots directed his way.