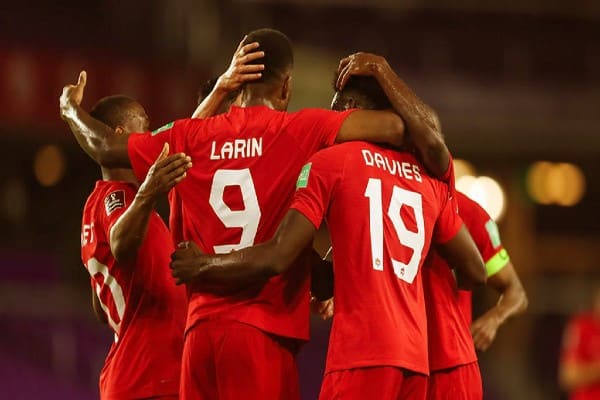 After a 4-0 win against Jamaica at BMO Field in March, the Canadian men’s national team has officially qualified for their first FIFA World Cup in 36 years. With their place in Qatar assured, here are some of Les Rouges‘ best moments on their road to FIFA World Cup 2022 in Qatar.

Win Over Haiti During The Qualification Round

Canada battled Haiti in a two-legged series. And it was their first chance to qualify for the CONCACAF final stage since 1997 on the line. And they emerged victorious with a 4-0 aggregate score that began their quest for history.

After an excellent first leg in which Canada went up 1-0 on a late goal from Cyle Larin, Les Rouges dominated in the second Leg. They added three more goals to their total and leaving no doubt as to their place in the Octagonal. The rest, as they say, is history.

After topping Group B in the First Round, they completed their second-round journey by winning the group. During this early phase, home games were held in Chicago and Florida. And it was a result of COVID-19 epidemic and border crossing difficulties. Don’t hesitate to check our selection of the best sportsbooks available for Canadian players.

During their September away game against the US national team, Canada faced one of its first major tests. The Americans took a 55th-minute lead via a goal from Brenden Aaronson. Canada didn’t fold when pushed against the wall, and they responded almost immediately, earning a 1-1 draw.

It was Larin who scored the equalizer, finishing off a set-up from Alphonso Davies to quieten the ecstatic crowd at Nissan Stadium in Nashville. In a big rivalry, it won an important road point against a top competitor while also offering a sneak peek of the tenacity and attacking guile this Canadian side will show.

It is extremely difficult to obtain a road result against Mexico at Azteca in CONCACAF. Similarly, Canada’s recent performance in accomplishing it attested to this fact, as the Les Rouges hadn’t done so since 2000 before their away match against El Tri in October.

The Canadians were able to cross that item off their list and did so in dramatic fashion, as Mexico’s Jorge Sanchez scored the game’s first goal in the 21st minute. Canada once again rose to the occasion, this time with an equaliser of Jonathan Osorio.

The success of FC Bayern Munich’s Alphonso Davies is undeniable. He’s the undoubted face of Canada’s rise to worldwide soccer prominence. During the qualification campaign, his finest hour came in a 4-1 home triumph over Panama in October. It appeared as if the harmless ball was going out of bounds. However the Bayern Munich star kept it in play.

He scored one of the most beautiful goals in recent years when. He dribbled past a defender in the 18-yard box. And he caught Los Caneleros goalkeeper Luis Mejia flat-footed at the near post. Following his COVID-related case of myocarditis, which caused him to miss Canada’s final two matches, his Twitch streams became a viral hit.

Road to FIFA World Cup 2022: Larin Wins it Against Mexico

Canada hadn’t beaten Mexico in over 20 years, when they topped El Tri in the quarterfinals of the 2000 Gold Cup, coming into their November match against Mexico. It ended thanks to a 2-1 victory at Commonwealth Stadium in Edmonton. The breakthrough was provided by Larin, who scored the game-winner in the 52nd minute after a hard-fought first half.

It represented perhaps Canada’s greatest triumph during its history. And it may well be seen as the moment when Canada fully established itself as a CONCACAF contender for the FIFA World Cup 2022 in Qatar.

Beating the US Boys

Canada sought to dispel any doubts about their rising status in the January window, when they attempted to break into the top spot on the Octagonal table. Les Rouges thoroughly topped the USMNT 2-0 at Tim Hortons Field on Jan. 30. And if there were any doubts about that, they were swiftly silenced.

The hosts dominated the action throughout most of the game, with Larin helping them to a stunning start by scoring just seven minutes in. It was tense at times, with the Yanks pushing for an equaliser. But the Canadians were rewarded in second-half stoppage time. Sam Adekugbe found a game-winning second goal to send Les Rouges to another impressive triumph.

Away Win at El Salvador

By the time February arrived, Canada’s rise was no longer a secret. However, they still had to accomplish things to keep their position in the standings. And making the three-point away victory over El Salvador on February 2 was another crucial moment.

The 57th-minute opener was one of the most memorable moments in the entire campaign. The long serving captain and CanMNT legend Atiba Hutchinson somehow scored a diving header from a seemingly impossible angle. No one deserved the distinction more than the ageless wonder midfielder who has been with the team since his debut senior cap in 2003.

It was a virtual certainty that Canada would qualify for the World Cup ahead of the final March window. After a 1-0 defeat away to Costa Rica delayed the party, the home match against Jamaica was everything they had hoped for. In a perfect performance, the Canadians were unafraid to leave anything on the table, eventually winning by a score of 4-0.

The party began when Larin and Tajon Buchanan each scored to make it 2-0 at halftime. The late insurance was provided by a goal from Junior Hoilett, who also scored, as well as an own goal. That made it a reality, as the Les Rouges players were able to celebrate in front of a jam-packed crowd at BMO Field in Toronto. It doesn’t get much better than that.