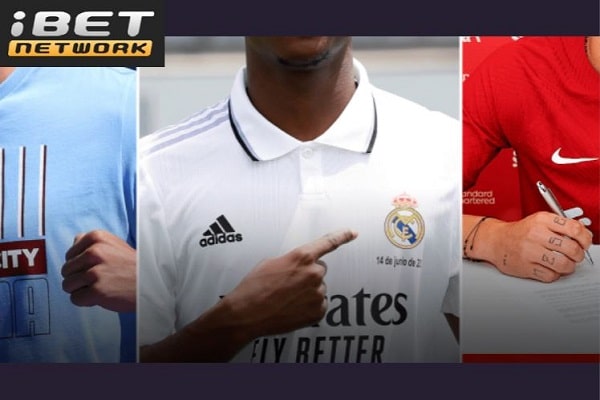 As always seen during the summer transfer window in European soccer, big transfers are made. The silly season, as it’s called, has seen some major moves this year, just like last year. Here, we’ll take a look at the top transfers in European soccer so far in summer 2022 and what they will bring to their new teams. We will also give you some links to online sportsbooks where you can get great odds on some markets for the rest of the transfer window.

Although 2021 saw some of the biggest names in football switch teams when Lionel Messi and Cristiano Ronaldo got new homes, we believe that some of the newly-signed contracts from this summer will prove to become game-changers for the teams involved.

One of the Bundesliga’s most impactful players last season was the young Norwegian Erling Haaland. The offensive player scored tons of goals in the yellow jersey and quickly became a favourite among the fans.

This summer’s biggest signing is Haaland to Manchester City. Manchester City has long had the cash for big names like this, and this time they got a top scorer that we believe will make them even stronger offensively. Sure, they already have a propped-up squad, but with Haaland, they get an explosive player that can still develop even further thanks to his young age. With the amount of money Manchester City have spent this is definitely one of the Top Transfers in European Soccer this summer. We do not see any other business happening this summer which will be bigger than this.

City’s Manager Pep Guardiola will be keen to put Haaland’s qualities on show. With the team they have, they’ll become near invincible if Pep can manage to bring the team together.

Betting Tip: Betway is offering +275 on Erling Haaland as the top goalscorer.

Although Koulibaly is not one of the most famous players around, he is one of the better players around. The defender is widely considered to be one of the best in world soccer. Chelsea as a team were in dire need of a top defenseman to make their squad even stronger especially after losing Rudiger.

With this signing, we believe that they will be able to compete at a higher level than last season. Kalidou Koulibaly played the previous season for Napoli where he was a regular starter.

At 31 years of age, he’ll bring both his talents and experience to the table. Great players like these tend to keep going for a couple of years more, something that younger players at Chelsea will be certain to take advantage of. An experienced player like him can teach younger talents much during practice.

Kalidou Koulibaly to Chelsea, here we go! Full agreement in place for €40m fee add-ons completed, bid accepted. Napoli are checking the documents then it will be official. 🚨🔵 #CFC

Betting Tip: Sportsbet.io have Chelsea at +1600 to win the Premier League.

Another interesting transfer is the one of Raheem Sterling from Manchester City to Chelsea. Sterling is a talented striker who definitely will strengthen Chelsea. Why did City let him go? Well, he was unhappy there. Now that they signed Haaland, he would probably become even unhappier.

This move will leave some City fans unhappy for sure, but Chelsea and their fans gained many offensive qualities here.

It can become one of the most impactful transfers in the Premier League should Sterling find great form at Chelsea. Maybe he’ll even sink City’s ship when the two teams play each other?

Betting Tip: Sports Interaction has Raheem sterling at -103 to be Chelsea’s top goalscorer.

The transfer of Tchouameni from Monaco to Real Madrid is one of the biggest moves with a large transfer fee this year. As a matter of fact, Monaco made a huge profit from the €80 million sale of Tchouameni.

For Real Madrid, it’s a move for the future. The 22-year-old is one of the best young midfielders out there. The Madrid team obviously already has a stacked midfield, but as ages are rising, a need for youth is essential.

The young midfielder will be certain to make the most out of being a teammate with players like Luka Modric, Toni Kroos and Casemiro.

Mané has long been a favourite among Liverpool fans, his qualities on the pitch are great so many will be unhappy to see him leave. The transfer, however, is a tactical one. Mané only had 1 year left on his contract so Liverpool wanted to make sure to not make a loss on such a good player.

They’ve already replaced him with Darwin Nunez who’s only 22 years old so the fans will probably not be unhappy for long.

Bayern Munich received a superb striker in the transfer, sure, they have not had any problems scoring goals, but now they will get even more competence and depth in their squad.

Betting Tip: 10bet has Sadio Mane at +400 to finish as the Bundesliga top goalscorer.

A transfer that not too many might have paid attention to is the one of Gianluca Samacca to West Ham. The 23-year-old had his breakout season last year in Sassuolo in Serie A scoring 16 goals in 36 games. This got him both in the Italian national squad as well as a spot in the West Ham team.

Anyone who has followed the Hammers’ last two seasons has seen the need for a top striker. Antonio has looked lonely at times and is getting older. Adding Samacca to the squad might be a game-changer for a West Ham team that is looking to establish itself at the top of the Premier League. We’ll see what David Moyes can do with this move.

The third most expensive transfer during this year’s transfer market was the one of Matthijs de Ligt. Bayern Munich signed the talented young player for €77 million.

He came from Juventus where he had a good season, but Matthijs de Ligt was looking for a move away from there. As Juve could not persuade him to stay, Bayern Munich took the chance to strengthen their team even more. With the young defender, they got a player they can count on for years if he’s happy there.

Another notable move where Bayern Munich was involved was the one of Lewandowski. The polish superstar has spent several years in Münich, so it was a bit surprising to see him leave. Barcelona paid €45 million for the superb striker.

Bayern Munich did not want the player to leave, but for such a vast sum they had to let him go. Barcelona, on the other hand, got a top player that will add both skills and experience to their team. Something that is needed to get them back to their glory days.

Betting Tip: Betway have Robert Lewandowski at +250 to be La Liga top goalscorer.

One of the worst economic moves in the history of football is the signing of Paul Pogba by Manchester United. They got him for the then world record fee of €105 million and never got him to shine. Now, he left the team for the second time, probably never coming back again.

Juventus signed him without a transfer fee, so imagine the losses. With 29 years in the bag, he still has a lot to give. Maybe the move back to Italy is what’s needed for him to find great form again.

Something certain is that the fans in Torino will be happy about this trade, no transfer fee and a player who’s among the best in the world when he plays at his best.

Betting Tip: Betobet has Juventus at +180 to win Serie A.

A move that enabled the signing of Haaland for virtually nothing in today’s standard was the sale of Gabriel Jesus to Arsenal. Manchester City only lost €6 million in the trade thanks to selling Jesus. A move that anyone would agree to if you ask us.

For Arsenal, this is a big signing. They looked great during the previous season with young talents like Odegaard and Martinelli. For the upcoming season, they’ll be lethal offensively. The move will certainly take them far in both the domestic Premier League and Champions League.

Betting Tip: Betway has Gabriel Jesus at +1100 to be top goalscorer.

A move even worse than the one of Paul Pogba to Manchester United is the history of Romelo Lukaku and Chelsea. The once hugely popular and superb striker didn’t get much playtime last season in Chelsea. He showed his disappointment and was no longer wanted by the club.

So, now he is back on a loan to Inter Milan who is laughing all the way to the bank. They sold him for €115 million to Chelsea only a year ago, now they have him back in the squad for a small €12 million fee. Talk about making money moves.

When playing at his best, Lukaku is still one of the better strikers in the world. We believe he’ll again find his form in Milano and make Inter dangerous in the upcoming Serie A season.

Leeds United signed Raphinha for only €20 million and has now sold him to Barcelona for €58 million. The young star scored 11 goals for Leeds during the last season, which must be considered good as they are not a top team.

In Barcelona, he’ll have the chance to develop into a superstar if given the right tools. Although the transfer might be good for Barcelona’s team, we list it thanks to what it gives Leeds United. €38 million in profits will certainly come in handy when trying to become a contender for the top spots in the Premier League.

We’ve seen Leeds involved in several impactful moves during this summer transfer window. They signed two new players, Brendan Aaronson and Tyler Adams and lost another great player that we’ll list down below.

The second big transfer for Leeds United was the sale of Kalvin Phillips to Man City, Phillips grew from the Leeds academy, so selling him might not have been the most fun of trades. But with the cash flow it generated, and the chance it gave Phillips, Leeds couldn’t resist.

Manchester City got a good replacement for Fernandinho who left for Brazil. Kalvin Phillips has already represented the English national team several times, so City fans should be really happy about the signing.

There we have it, folks. The top transers in European soccer of the 2022 summer transfer window, so far. Will Manchester United be able to compete with City and Liverpool in the season to come? And how will David Moyes’ West Ham handle the new players?

Many questions are to be answered in this upcoming season that will definitely be one of excitement. First, though, we have the World Cup. Will the biggest transfers of 2022 show why they were signed in the world’s largest football tournament?

Wait and see. All football fans will certainly follow Haaland’s journey to Manchester and how the largest transfer of 2022, Tchouameni, will perform in Real Madrid. We will keep an eye on the players for sure.