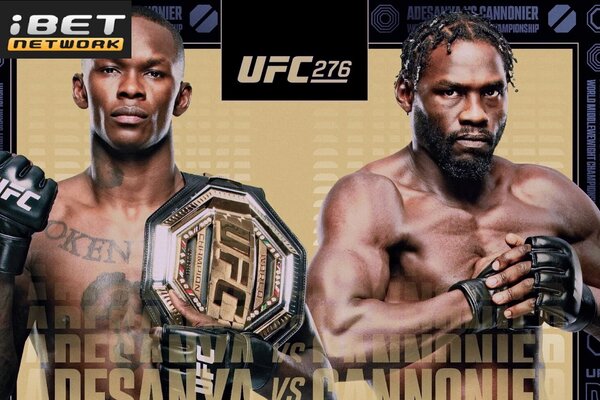 UFC 276 promises to be one of those nights that every MMA fan doesn´t want to miss. The main event will be hosted by Israel Adesanya who is going to defend his belt against Jared Cannonier and the event will take place in Las Vegas at the T-Mobile Arena in Paradise.

Our partners Betway have some great odds on the fight. Create a new account and get a 100% deposit match up to $300 and place a bet on this fight.

The Last Stylebender has become a phenom in the UFC in recent years and his name will probably be remembered as one of the greatest in the Middleweights. Beatiing fighters like Robert Whittaker and Marvin Vettori (2 times), Paulo Costa, Yoel Romero and even Anderson Silva, Israel Adesanya is the fighter that has everything that an MMA athlete needs. He is smart, accurate, technical, precise, meticulous, relentless. The man is a machine with the best cardio in the game.

For this fight, Izzy will probably try to keep the long distance and uses his precision to create the most damage as possible in order to get a win as he did in a spectacular way against Paulo Costa and Robert Whittaker.

Jared Cannonier is a veteran in the game and he has already shown that he has everything to become the next Middleweight Champion.

The number 2 ranked in the UFC has beaten fighters like Gastelum, Hermansson and even the legend Anderson Silva. He is the first fighter to have knockouts in three different weight classes. When talking about his style, his explosive power and his leg kicks are his best weapons. He’s also good at closing the distance and then utilising his wrestling background. This is something that can help him a lot in this fight.

Even though Israel Adesanya is clearly the favourite to win, we don’t think it is going to be a walkover.

If we take a closer look at how the fight may go, there are some patterns for each fighter that we should be familiar with.

Israel will poke, tease and always try to find opportunities to hit Jared’s body. There is a high chance that both fighters will be constantly attacking each others’ lead legs as Izzy did against Paulo Costa in the first round.

When it comes to Jared, the first thing that he must do is close the distance from the outside, always check for the leg kicks and be calm.

One thing that we have already seen before and can´t happen is to allow Izzy to control the game by keeping the distance as he likes to do with all the opponents that he fights. If Jared allows that and falls into the trap of waiting, the fight can be compromised unless he can catch him with his explosive jab in a counterattack.

When talking about Izzy, there are a lot of things that he must be aware of to escape Cannonier’s strong power. Jared has enough strength to put anyone to sleep with just one blow. The fight can go in his way if he counterattacks at the right moment.

One of the things that Jared can do is soak up the punches from Adesanya. This may sound crazy but the fact is that Israel is very technical and very precise but he doesn’t have enough strength to put people to sleep. Jared has done this several times during his career. If he allows that then he can counter attack with his strong jab inflicting a lot of damage to the Last Stylebender. Whatever the outcome, UFC 276 promises to be one of the better shows this year.

There is a very high chance that the main fight for UFC 276 will go the distance since Israel does not like to rush when he does not feel comfortable. This can be a great bonus for him since his cardio is one of the best in the game. On the other hand, this can be a problem for Jared since most of his fights finish in the first rounds. He will have to keep up with Izzy or unless he throws his powerful jab and finishes the fight before the fifth round.