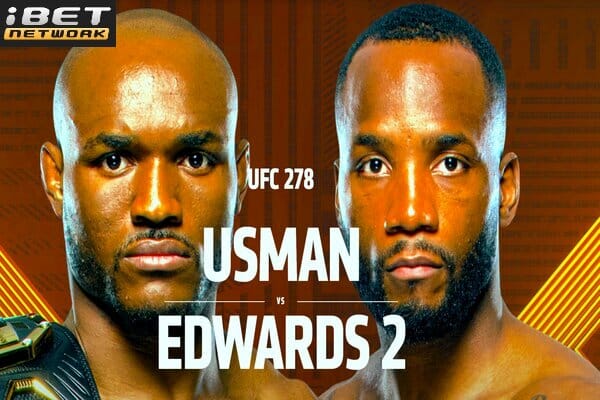 UFC 278 is one of those events that every MMA fan across the world doesn´t want to miss. For the main event fight, we have Kamaru Usman facing Leon Edwards for the second time. The first fight between the two happened in 2015 with Usman winning the three rounds and not giving Edwards any chance. A lot has changed since then, with Kamaru being the welterweight champion and defending his title five times.

In the co-main event, Paulo Costa will fight Luke Rockhold and José Aldo will fight Merab Dvalishvili. All these fights will be insanely good, but the main fight of the evening is going to be without a doubt the best one. Here are our predictions and tips for the UFC 278 main event.

Defending his title 5 consecutive times, nothing seems to slow down “The Nigerian Nightmare” who has proven that he is the real deal since he won the Ultimate Fighter in season 21. Being one of the best wrestlers in UFC history, his striking ability has improved a lot since he started to train with coach Trevor Wittman who helped him to gain his balance and find his unique style inside of the Octagon. With his wrestler background and his Brazilian Jiu-Jitsu black belt, Kamaru is one of the scariest guys in the sport and there are very few individuals who can actually came close to him in his division.

Leon Edwards has come a long way since the last time he fought Kamaru. Having won 9 of his last 10 fights, Edwards is without a doubt the kind of fighter that can be a tough challenge for Usman. Usman looks unbeatable, but if anyone can potentially fight a chink in his armor, Edwards is that man. Leon’s striking is his best weapon and his takedown defence has significantly improved since his loss back in 2015. Being the underdog in this fight, he has proven more than once that he can win even when the odds are against him as he did when he fought Nate Diaz and Rafael dos Anjos.

When is the Kamaru Usman vs Leon Edwards Fight?

If you want to place a few bets, you can find the best sportsbooks to bet on UFC 278 or any other major sporting events.

It´s been 7 years since the last time they fought. Both fighters are completely different and better than they were back in 2015. Leon managed to beat some very tough opponents but Kamaru became the champion and defended his belt against fighters like Jorge Masvidal and Colby Covington. He’s even defended the title multiple times and is now the number 1 pound-for-pound fighter in the world. On the other hand, Edwards will try to show the world why he is the one that can beat Usman and how hard work pays out at the end of the day.

When it comes to the prediction and how the fight will go, there is a very high chance that the fight will go to the ground since Kamaru likes to control the opponents without giving any space for them to react. In an interview, he even said Leon has better striking than him but is not as good in wrestling.

We all think Kamaru will win this fight, however, many things can happen if Leon keeps the fight standing.

Prediction: Usman to win by submission in the third round.