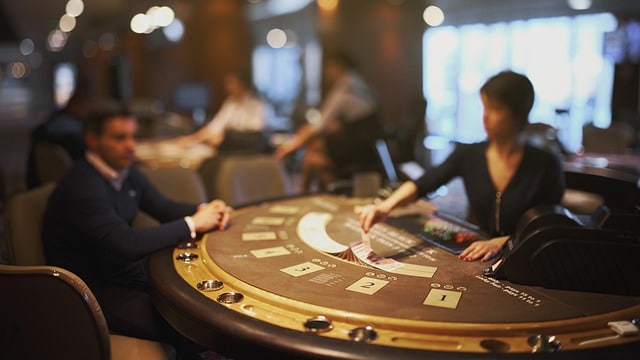 Las Vegas Strip Blackjack takes its name from North America’s most famous gaming destination. This is one of the most popular card game variations. It is also the most popular variation among the land-based casinos along Sin City’s neon-lit Strip. Vegas Downtown Blackjack is a different variant of the game and has its own distinct set of rules.

However, if you enjoy this variety, there is no need to travel to the Strip. Due to its popularity, Vegas Strip Blackjack has made its way into the catalogues of a number of online casinos, notably those that use the Microgaming software platform.

Both the online and offline versions of Vegas Strip Blackjack work in the same way. Blackjack fans who want a dynamic game with a low house edge and favourable regulations love it. This article will go over the game rules and include a few helpful hints on how to improve your chances of winning at Vegas Strip Blackjack.

How to Play Blackjack on the Las Vegas Strip

The goal of the player in Vegas Strip Blackjack, as in most basic forms of the card game, is to defeat the house with a better hand total without exceeding the highest score of 21. A ten-value card plus an ace is the best possible hand in the game. The court cards and tens have a value of ten, whereas the aces have a value of one or eleven. All other cards have the same value as the number of pips they contain.

This game has many decks and hole cards, however, the actual quantity varies across casinos on the Strip. At most casinos, the dealers stack together four decks together and deal from a shoe. This allows the dealer to pluck out a single card at a time rather than having to hold the entire pack in their palm.

Players receive two exposed cards at the start of each round. The dealer’s hand consists of one face-up and one hole card. Following the deal, players can choose to hit (get more cards), stand (receive fewer cards), split pairings, or double down by placing a side bet. If you double down the dealer will only give you one more card.

In addition to the two cards received at the start, both the player and the dealer can draw up to nine additional cards. Whoever has a total of more than 21 loses the coup. When the dealer and the player both draw the same total, the coup is a tie and the player gets their stake back.

Naturals, commonly known as blackjacks, are the highest-scoring hands and so stand by default. Blackjacks provide a 3 to 2 payout. Unless a winning insurance bet was placed at the table, all other winning hands pay equal money. The dealer, who must stand on totals of 17, has no decision-making authority.

Because of its favourable regulations, Vegas Strip Blackjack provides the house with a very tiny edge, ranging from 0.18% to 0.78%. This depends on which Las Vegas casino you visit. The house advantage in online versions of the game, such as the one provided by Microgaming, is a modest 0.35%.

Most blackjack variants, with the exception of Pontoon, offer late insurance, and Vegas Strip Blackjack is no exception. When the dealer’s exposed card is an ace, players can ensure their hand against a blackjack. The player needs to place a side bet equal to half their original wager.

The dealer would examine each player’s hole card after they had declined or accepted insurance. If they do have blackjack, the insurance bet pays 2 to 1 and the player’s other hand loses. In other words, no money changes hands because the insurance bet effectively covers the losses made on your initial hand. If you accept insurance but the dealer does not have a natural, your insurance bet loses and you are free to play your other hand.

When the dealer is presenting court cards and tens in Vegas Strip Blackjack, the dealer will peek for probable naturals, preventing players from pouring money into hands that will automatically lose. When dealers present a ten-value card, however, the players cannot get insurance.

Advanced blackjack players frequently split pairings of like cards in order to extract more value from their hands. This can also mean more money from the house’s coffers. Remember, you are effectively playing two hands at once. The second one needs to be a bet of the same size as your first.

The player can split any kind of pair in Vegas Strip Blackjack as long as the two cards have the same value. You can also resplit to make up to four different hands as long as the pair does not contain two aces. If this is the case, you can only split once. When aces are split, you can only draw one card per ace before being forced to stand.

When two ten-value cards are divided and the player is dealt an ace, the hand does not count as a natural, even though the total value of the hand is 21. In such cases, instead of paying 3 to 2, the winning hands would yield an even-money payoff. When you split pairs of aces and receive ten-value cards on one or both split hands, the same rule applies.

Doubling down is another strategy to boost your profits in a winning position because it requires you to place a second bet equal to the amount you initially staked on your hand. When you double down, you effectively spend more to receive only one more card on your two-card total. If you win, you will receive twice the amount you would have received with this hand if you had lost.

The rules for doubling down in Vegas Strip Blackjack are among the most generous you’ll find at any blackjack table. Remember that you can only double down on hands that contain certain cards. You are not allowed to make this movie if you have already hit your starting hand. What’s great about this variation is that you can double down after splitting a pair, and you can do so on any total you choose as long as it’s only two cards.

Making only optimal options when playing your hands is one of the surest methods to reduce the house’s advantage. Some players may say that this is not possible in gambling, but the truth is that it is, at least as long as you follow fundamental techniques. This is usually in the form of a chart that shows you what the best moves are in each case.

Basic strategy charts are based on calculations that have determined the proper play for every possible combination of cards at a blackjack table. These calculations use a massive sample gathered from hundreds of thousands of hands, and they are guaranteed to work in the long run.

We recommend that you select a strategy chart that corresponds exactly to the rules applicable in Vegas Strip Blackjack, as the optimal moves may alter when rule inconsistencies are present. To play your hand optimally, all you have to do is check which move is stated as properly based on the sum of your beginning hand and the dealer’s exposed card. You won’t win every time, but you may expect to cut your losses in the long run.

Improving Your Blackjack Odds on the Vegas Strip

We’ll go over a few strategies that can help you beat the casino when playing Vegas Strip Blackjack. The first piece of advice concerns insurance, which is just a wager on whether or not the dealer is holding a natural while their exposed card is an ace.

In four-deck games like Vegas Strip Blackjack, where the cards in the pack are properly shuffled, basic-strategy players should avoid this side bet and never insure their hands against dealers’ naturals because this wager carries an eye-watering house edge of roughly 7%. Insurance is a sucker bet in blackjack. Only card counters who know when their odds of getting a blackjack have increased dramatically use it. The only time this rule does not apply is when the basic-strategy player gets a blackjack – naturals are always worth insuring.

When not to Split

The second piece of advice is to avoid splitting pairings of ten-value cards at all costs. With one of these hands, you’re already in the clear, so there’s no need to jeopardize your chances and risk losing twice as much as you bet on the pair.

Also, when the dealer’s exposed card has a value of 5 or 6, the dealer is in trouble. With such cards, the dealer is more likely to draw over 21, and a good player would take advantage of this weakness. When the dealer reveals a 5 or a 6, players should stand on hard totals of 13 through 16. 17 is not a good total.

Inexperienced blackjack players may believe that 17 is a good total, but this could not be further from the truth, at least mathematically. The safe zone for blackjack players is a sum of 18 or more, according to mathematics. As a result, you must always draw more cards until you reach 17 when the dealer reveals a ten-value card.

Last but not least, always split pairs of aces and eights. When you are dealt two 8s, you are actually sitting on a 16, which is one of the worst possible totals in blackjack. Separating those 8 into two hands is the recommended technique of play because it allows for more room for advancement.