Who is going to win Super Bowl LVI in Los Angeles, California? 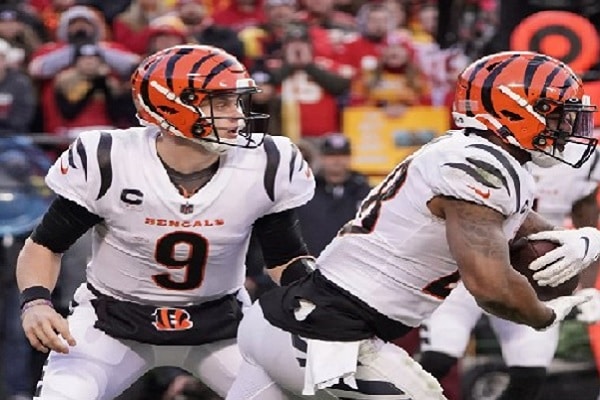 The Los Angeles Rams (15-5) will play the Cincinnati Bengals (13-7) in Super Bowl LVI at SoFi Stadium in Inglewood, California on Sunday. The Bengals are a 4-point underdog. The over/under is set at 49 points for the upcoming Super Bowl LIV appearance. The Los Angeles Rams are 15-5 this season. The Rams defeated the 49ers in the NFC Championship by a score of 20-17 in the final. Los Angeles Rams quarterback Matthew Stafford completed 31 of his 45 passes for 337 yards. He had an 96.2 percent completion ratemand ended with one interception. Cooper Kupp had an average of 12.9 yards per catch, totaling 142 yards on 11 receptions.

Cam Akers was the Rams’ best rusher, accumulating 13 carries for 48 yards (3.7 yPC). Overall, they had 76 plays for 396 yards. The Los Angeles Rams ran the ball 29 times for 70 yards and gained an average of 2.4 yard per attempt. The Rams gave up 50 yards on 20 rushing attempts, for an average of 2.5 yards per run allowed. Los Angeles Rams managed only 16 completions on 30 attempts for 232 yards while only gaining a 53.3 percent completion rate.

Best Canadian sportsbooks have already published their odds. So make sure to register and grab a welcome bonus for the Super Bowl LVI in SoFi Stadium.

The Rams rank 15th in the NFL in terms of team defense, allowing 21.9 points per game. This season, opposing teams have rushed for 4.0 yards per carry and 103.2 rushing yards on average. Overall, the Rams are allowing 1,754 rushing yards through 17 games. The Rams have given up 4,109 passing yards, which puts them in 22nd place in the NFL. They’ve surrendered 241.7 yards through the air per game this season, as well as a 66.6 completion percentage. They have given up 344.9 yards per game this season, placing them 17th in the league. They’ve allowed 17 touchdowns by air and 18 by running the ball.

The Bengals are 13-7 for the season this year. In the AFC Championship, Cincinnati prevailed with a final of 27-24 against Kansas City Chiefs. Cincinnati’s Joe Mixon rushed 21 times for 88 yards, totaling 4.2 yards per carry in the last game. In terms of receiving for the Bengals, Tee Higgins had the finest day, catching 6 passes for 103 yards (17.2 yds per reception). Joe Burrow rushed for two touchdowns and finished with 250 yards on 23/38 passing, posting an 86.5 rating.

He had one interception, but his average yards per try was 6.58 yards. The Bengals surrendered 24 rushing attempts for 139 yards (5.8 yards per carry). The passing defense allowed a completion percentage of 66.7 percent, giving up 236 yards on 26 completions for 39 pass attempt. The Bengals accumulated 359 yards in the game, including 66 plays (5.4 yards per play). Cincinnati rushed for 4.3 yards per carry and ended with 116 yds on 27 runs (5.6 ypc) versus Kansas City.

How are Bengals Chances to Win on Sunday?

The Bengals are yielding 22.1 points per game, putting them 17th in the NFL. For the season, Cincinnati has given up 1,742 rushing yards (102.5 yards per game) and 15 rushing touchdowns. Cincinnati’s defense has allowed 26 passing touchdowns, giving up 248.4 yards on the pass each game. The team is 26th in terms of points scored. Cincinnati’s defense has played 1,075 plays, which is 17th in the NFL. They’ve given up 376 points in the course of the year. Their defense has accumulated 21 takeaways (8 fumble recoveries and 13 interceptions) this season.

Who Will Perform at Super Bowl LVI Halftime Show?

The Super Bowl LVI Halftime Show on Sunday, Feb. 13, 2022 will feature Dr. Dre, Mary J. Blige, and a roster of A-list celebrities, CBS sports reports. In September, the NFL revealed the list of performers for this year’s big game. In a tweet Dr. Dre wrote “I’m extremely excited to share the stage with my friends for the #PepsiHalftime Show. This will introduce the next saga of my career. Bigger and Better than Ever!!!”

Two Los Angeles legends—Snoop Dogg and Kendrick Lamar—as well as Eminem will perform during the halftime show. The announcement of the lineup in January set a new high for fan interest in the event, with a trailer for the performance featuring all five artists generating an all-time record level of excitement. This year’s lineup of artists has a total of 43 Grammy wins and 19 No. 1 Billboard albums, among other accolades.

Two American Sign Language artists will perform in the show for the first time in Super Bowl history: Warren “Wawa” Snipe and Sean Forbes. Snipe performed a version of the national anthem and America the Beautiful last year at Super Bowl LV. Forbes has written a number of popular songs, including “Let’s Mambo,” as well as an album called “Little Victories.” This is the third halftime performance by the NFL, Roc Nation, and Pepsi. In Tampa last year, The Weeknd sang at Raymond James Stadium during Super Bowl halftime show. The game will be held at SoFi Stadium in Inglewood, California, which is also the home of the Rams and Chargers. The matchup between the Rams and Bengals is scheduled for 6:30 p.m. ET.