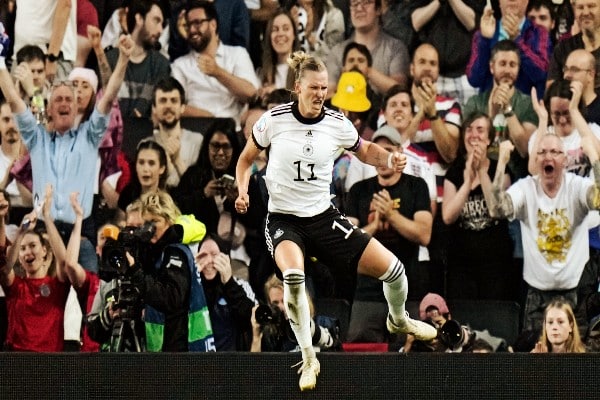 This Saturday England’s Lionesses will face the German team in the EURO 2022 final at Wembley. We have a look back at the semifinals and will share our women’s EURO final prediction for this year’s tournament.

Even the most loyal England supporter would have to agree that their team was second best for significant portions of their quarterfinal win over Spain. The pre-tournament favourites were considerably more certain and self-assured in possession. In contrast, England had trouble keeping the ball and appeared distressed whenever they possessed it. The Lionesses had encountered few challenges in the group stage, but their first face-to-face encounter with a fellow powerhouse was on the verge of disaster. England kept their composure, dug deep, and changed the game around in a dramatic turnaround. The match ended in extra time after Ellie Toone scored a tiebreaker in the 84th minute and Georgia Stanway blasted home a winner in the first period of extra time. Spain were deflated, and England kept its advantage for the rest of the game.

Given how they had played during the 120 minutes against Spain, there was some worry that England may struggle to handle the tension of Tuesday’s semi-final. Sarina Wiegman’s team was exceptional from the opening whistle against Sweden, one of the Women’s Euro 2022’s most well-balanced teams. They were filled with confidence, intensity, and speed, and their opponents could not keep up. A 4-0 scoreline was unjust. Alessia Russo’s amazing goal, a backheel that nutmegged the Sweden goalkeeper, was shared across social media. Rather, such a goal was in line with England’s overall performance, which resulted in them creating many more chances than they did against Spain. The Lionesses are now beginning to feel that they are fated to triumph in the Women’s EURO 2022.

Germany’s semifinal, on the other hand, was a much more competitive match. However, their performance was no less stunning than England’s – albeit in a unique way. The French women are a team to be feared and on match day one, they opened their campaign with a 5-1 thrashing of Italy, in which all of their goals came in the first half. Even in absence of Marie-Antoinette Katoto, who was injured in their second game, France has a formidable striking force. The French Women’s National Team certainly had its moments in Milton Keynes on Wednesday. Alexandra Popp scored for Germany before half time, but France equalised just before the halftime break. It was the first goal they had conceded all tournament, and it followed a four-match streak without allowing a goal.

Germany recovered well and dominated possession after the halftime, before Popp converted in the 74th minute to win the game with her sixth goal of the tournament (she is level with Beth Mead in the race for the Golden Boot, which will also be decided on Sunday). France might be proud of themselves, but they failed to live up to the high expectations. Germany played with confidence and composure, balancing intensity with calmness. The Germans have already won this contest eight times, while the rest of Europe has four victories altogether. It’s true that many of Voss-Tecklenburg’s players were absent from the team’s previous triumphs, including the most recent in 2013, but the national team’s collective knowledge will assist them this weekend.

It’s difficult to forecast the winner of this encounter. England has advantage at home, but Germany is a match for them on a soccer level. Germany’s players are also much more seasoned in big finals, and they are unlikely to fall apart if the occasion calls for it, but even the Nationalelf might have trouble dealing with England if they can repeat their Sweden performance here. There are a lot of factors going into this prediction, but in the end, it is hard to tell who will win. It’s also difficult to predict which team will take home the silverware on Sunday.

For that reason, we suggest that you look at other betting markets. Both teams to score is an alternative worth considering, but the value isn’t quite as good as that for over 2.5 goals. Final games are frequently tense, cagey confrontations. That makes sense: the higher the stakes, the less inclined a team is to take chances. They’re both attacking-minded sides who won’t be satisfied to play on the defensive here. On Sunday, go for more than 2.5 goals.