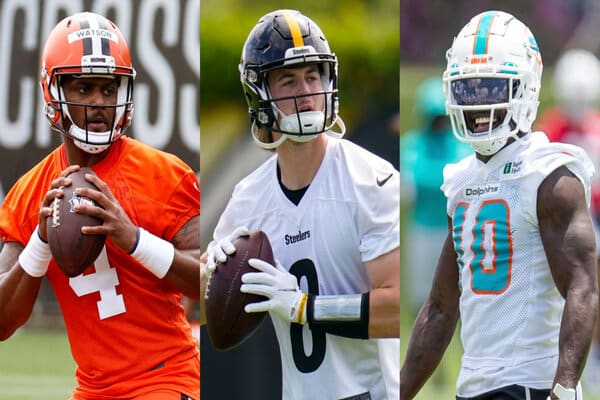 As the NFL moves on to Week 16 of the 2022 season, the playoffs are approaching. Yesterday, the Jacksonville Jaguars defeated the New York Jets 19-3 to get things going. The Jags improved to 7-8 with the victory, preserving their chances of making the playoffs. In this NFL Bets Week 16: Falcons vs Ravens, Lions vs Panthers, 49ers vs Commanders article, I’ll sum up the games quickly, make a prediction, and give you a breakdown of the best odds currently available.

The Atlanta Falcons haven´t had a great season so far. However, they still have some chances of going to the playoffs. With a record of 5-9, they stand with Carolina and New Orleans, for second place in the NFC South. After losing their last 3 games in a row, they are coming to play in the Baltimore Raven’s hometown which makes things even more complicated for them.

Baltimore on the other hand is having a better season than the Falcons, standing 2º in the AFC North division with a record of 9-5, I really like the way that they are playing, and I believe that they can still finish on the top of the division if they win the next few games.

This will be the first time that these teams are going to face each other and if I had to choose, I would go with the Ravens, not only they are playing better right now but they also tend to be way more consistent than the Falcons.

Another great game to watch is going to be the Detroit Lions against the Carolina Panthers. The Lions are having a great season, being 2º in the NFC North division with a 7-7 record, they are coming to play this game after 3 consecutive wins against very strong teams like the Jets, Vikings, and Jaguars.

The Panthers also have a good season as well, being 2º in the NFC South with a record of 5-9, it’s very important for them if they win this game if they want to climb to the top of the division.

This will be also the first time that these teams are going to play against each other and are very hard to predict the outcome of this one since I think both teams can win this game, however, I think I would choose the Lions, they are very confident right now after beating very strong teams as I previously stated.

And finally, one of the best games for this weekend is the 49ers vs Commanders. The 49ers are having a very good season so far. Being in the 1º place of the NFC West division with a record of 10-4, the 49ers have won their last 7 games against very strong teams like the Dolphins and the Buccaneers.

The Commanders aren´t having a good season, they are at the bottom of the NFC East with a record of 7-6 and they are coming to play this game after a defeat against the Giants, something that I was already expecting. The problem with the Commanders was the fact that they had a very bad start at the beginning of the season, after winning the opener against the Jaguars they lost 4 straight games losing their confidence back then.

The last time that these teams face off was back on Dec. 13, 2020, so it´s been a while since they played against each other. For this game I can´t see the 49ers losing this game, they are having an amazing moment right now and I feel like they are going to win comfortably.

My top NFL predictions for Week 16 were those. What do you think? Have a look at our online sportsbooks reviews If you want to learn more about the NFL’s greatest betting odds. Check DAZN Canada in order for you to view all the games you want.