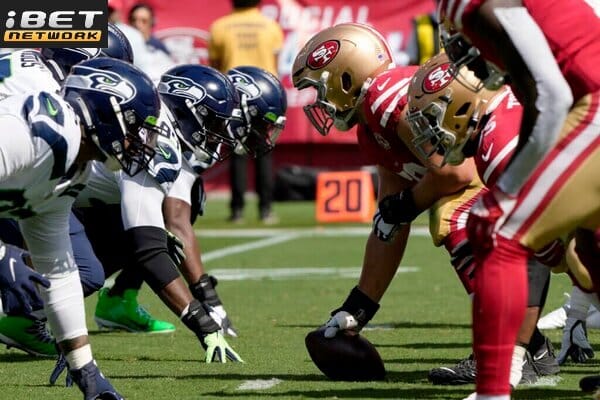 The NFL had some incredible games last week and a few upsets that caught everyone off guard. The Jaguars beating the Titans and the 49ers destroying the Buccaneers were two of my favourite. I was very impressed with the Detroit Lions, who managed to defeat the Vikings in a spectacular way. In this NFL Picks Week 15: 49ers vs Seahawks article, I’ll give a quick breakdown of the game, my prediction, and give you a selection of the best odds you can find at the moment.

If you would like more information about betting in general, check out our Sports Betting page (outside of Ontario).

The San Francisco 49ers vs Seattle Seahawks is going to be a game that no fan wants to miss. The 49ers had an amazing weekend after their victory against the Buccaneers in a very exciting game. To be honest, I wasn’t expecting the game to be as exciting as it turned out to be. The 49ers are currently in first place in the NFC West division with a record of 9-4. The 49ers have only lost one game in their last 7.

On the other hand, the Seattle Seahawks aren’t having a bad season either, being in second place in the same division, with a record of 7-6. However, they are on a cold run of form at the moment with three losses in their last 4 games. One of those losses was against the Raiders, something that was really disappointing because the Raiders have been one of the worst teams in the NFL this season.

This will be the second time that these two teams are going head-to-head this season. The first time they played was back in September and the 49ers won 27-7. I think they will win it once again since they are playing better and they also are way more confident that the Seattle Seahawks who just lost their last game against the Panthers.

And these were my top NFL Week 15 picks and bets (49ers vs Seahawks). What do you think? See our online sportsbooks review page for more information on the most common NFL odds. Check DAZN Canada if you wish to watch every game.